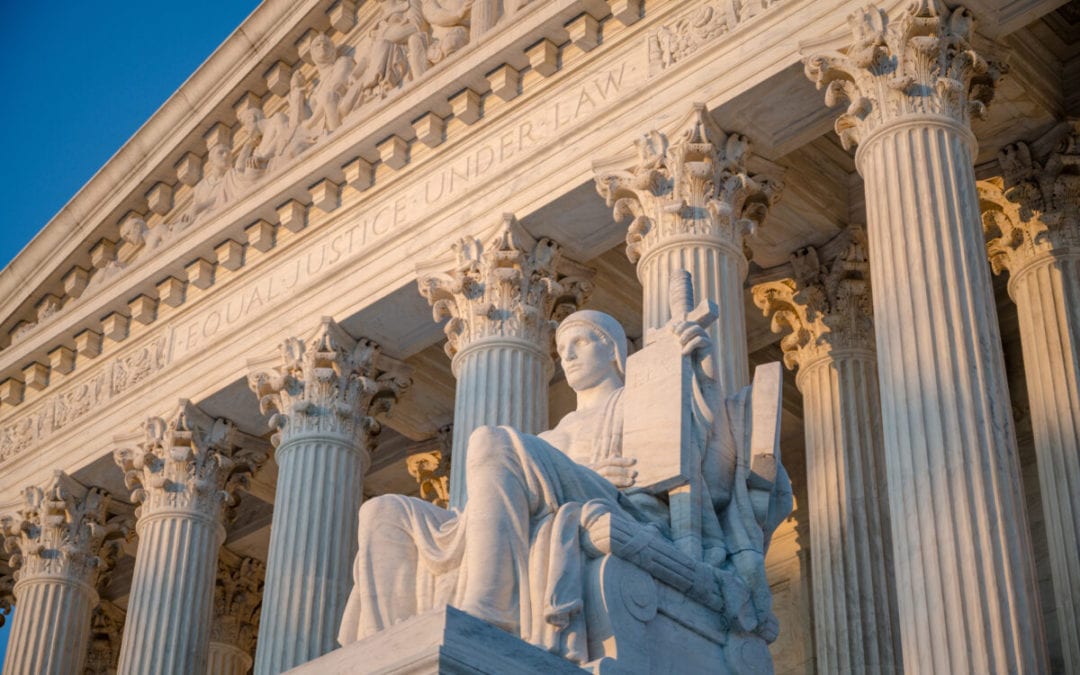 BALTIMORE — Derrick Johnson, president and CEO of the NAACP, issued the following statement today on the misleading testimony of Judge Amy Coney Barrett before the Senate Judiciary Committee regarding her nomination to the Supreme Court:

Judge Barrett’s testimony about her ruling, in this case, is even more disturbing, as she plainly misrepresented her ruling at her confirmation hearing. During questioning by Senator Cory Booker on Tuesday, October 13, 2020, Judge Barrett testified that she had rejected Mr. Smith’s hostile environment claim because he failed to base his claim on being subjected to use of the n-word by his supervisor.

No Senator, I think you’re mischaracterizing what I said, with all the respect. In that opinion, the evidence he introduced to show the hostile work environment was the use of expletives when he drove the wrong way down, he was hired to be a safety driver for the Illinois Department of Transportation. And he based his hostile work environment on the use of expletives at him based on poor work performance. That was what he relied upon and then his termination proceedings had begun.

He didn’t tie the use of the n-word into the evidence that he introduced for his hostile work environment claim. And so as a panel, we were constrained to decide based on the case the plaintiff had presented before us. So the panel very carefully wrote the opinion to make clear that it was possible for one use of the n-word to be enough to establish a hostile work environment claim if it were pled that way.

Contrary to Judge Barrett’s testimony, Mr. Smith based his hostile environment claim on the incident in which his supervisor called him a “stupid ass n-word.” Repeatedly in the briefs submitted to Judge Barrett and at the oral argument, Mr. Smith’s counsel quoted the evidence attesting to use of the n-word and expressly relied on that evidence to support the racially hostile work environment claim.

Compounding the tragedy caused by the decision, Judge Barrett’s ruling even denied Mr. Smith the opportunity to present his claim to a jury, finding a jury could not conclude on the facts of his case that use of the n-word—a vile racial epithet steeped in a long history of racist abuse—exposed him to a racially hostile work environment. As a result, a jury was denied the opportunity to hear that Mr. Smith’s supervisor used the racial epithet in anger toward Mr. Smith. The supervisor went on to threaten Smith with the loss of his car and home. After that incident, Mr. Smith was forced to seek treatment for depression. Those details and that chronology were expressly recounted at the oral argument, but were never mentioned in Judge Barrett’s opinion.

Judge Barrett’s account of her opinion in this case is neither accurate nor sufficient. The Senate Judiciary Committee must call Judge Barrett back to explain both her decision in that case and her answers to Senator Booker’s questions. It is disturbing enough that Judge Barrett declined to rule that use of this vile racial epithet constituted a racially hostile work environment. But her misrepresentation to the Judiciary Committee about the basis for her ruling raises serious questions about her truthfulness and candor under oath that extend far beyond this particular case. The Senate Judiciary Committee should fully explore her misleading testimony prior to voting on her nomination.”

The relevant portions of Mr. Smith’s Seventh Circuit briefs are attached, as is the transcript of some of the oral argument in which references to the “n-word” incident were called to the attention of Judge Barrett.  The audio recording of that transcript is available on the website of the U.S. Court of Appeals for the Seventh Circuit, under the case number: 18-2948.

Excerpts of Briefs and Oral Argument

STATEMENT OF THE CASE:

Mavin Harrison stated that “He (Appellant) was mistreated by Lloyd Colbert (a supervisor and trainer with Appellee)[1] several times and who called him the ‘N-word’ frequently.” (P. 5) (emphasis added).

SUMMARY OF THE ARGUMENT:

The second issue on appeal is the rejection of Appellant’s hostile work environment claim. The district court said, when discussing Lloyd Colbert’s alleged usage of “stupid ass ni**a” [record citation], that “of course a jury could find that Colbert’s use of this vile racial slur was motivated by race. But that is the one instance of anything similar happening. [“] [record citation]. This is factually incorrect. In his deposition, Appellant did say he had been called a “stupid ass ni**a,” but he didn’t say that this was the only [emphasis supplied) time he was called that—the district court assumed it. Also, Marin Harrison remembers Appellant being called this vile term several times. [record citation]. (P. 15) (emphasis added and in original).

Appellant complained several times about the severity of the harassment made against him….  Appellant was called a “stupid ass ni**a” [record citation]. The district court said that “a jury could find that Colbert’s use of this vile racial slur was motivated by race. But that is the one instance of anything similar happening.” [record citation]. This is actually an assumption made by the district court and is only part of what Appellant had to say about this. In his deposition, Appellant had this exchange: “Q: Do you know if Mr. Colbert was ever disciplined as a result of that complaint. A: No, I know that they called him down to Schaumburg and he was pending investigation. And they didn’t go into much detail, and I don’t – I just know when he came back, he was very angry and upset, and he seen me in the locker room. He said that it’s going to be 81 of us against 1 of you when we to trial. He said that – he called me a stupid ass ni**a; that I was going to lose everything that I own, my house and my car. And I told him I don’t have a house to lose.” … [record citation]. At no time was Appellant asked how many times he was called the “N-word.” More likely than not, he was called this several times. Mr. Marvin Harrison, in his Affidavit, states that “He (Appellant) was mistreated by Lloyd Colbert who called him the ‘N-word’ frequently.” (emphasis supplied). [record citation]. The district court has some issues with Mr. Harrison’s Affidavit. (Pp. 25-26) (emphasis added and omitted).

III. Smith offered sufficient evidence to allow a reasonable jury to find that he was subject to a hostile work environment.

Close reading of this decision shows that the Court said: “Sanders’ response failed to address the issue of the suspension and instead focused on the use of the word “nigger,” citing cases for the proposition that the word created a hostile environment in and of itself (emphasis supplied). Because Sanders did not notify the trial court to the theory he now advances—that he was suspended because of his race—he has waived any such claim there and on appeal.” But, the use of the “n-word” was just part of the hostile environment created by Appellee. Turning the Court’s attention to Appellant’s Response to Appellee’s Summary Judgment Motion, there is mention of other intimidating conduct by Appellee: (1) Lloyd Colbert, his supervisor, told Appellant that he was going to lose everything that he owns, his house and his car; (2) Roman McGhee, another supervisor, told Appellant he was “… a stupid dumb Mother Fr.” He also told him that “I’ll kick your ass you dumb m.f-r.” Appellant ended up seeing a psychiatrist for depression as a result of these instances of corrosive conduct. [record citation]. Appellants position is that the combination of the “n-word” and the acts identified immediately above did create a hostile work environment, and, what happened to Appellant is distinguishable to what happened to Sanders because in Sanders no such additional instances of adverse working conditions were so mentioned. Furthermore, the Appellant directs the Court’s attention to Gates v. Bd. of Educ. of Chic., 916 F.3d 631, 640-41 (7th Cir. 2019) where the Court said, “The issue is whether the discriminatory conduct Gates testified to qualifies as sufficiently severe or pervasive to alter the conditions of his work environment.” In this decision, the Court said that “We have repeatedly treated a supervisor’s use of racially toxic language in the workplace as much more serious than a coworkers and referenced Robinson v. Perales, 894 F.3d 818, 828 (7th Cir. 2017), and, that “it was necessary to note ‘whether the remarks were stated directly to plaintiff of whether the plaintiff heard them secondhand referring to Dandy v. United Parcel Service, Inc., 388 F.3d 263, 271 (7th Cir. 2004). Also, the Court noted in Gates that “there is no magic number of slurs” needed to show hostile work environment, and “an unambiguously racial epithet falls on the ‘more sever[e]’ end of the spectrum” – see Hrobowski v. Worthington Steel Co., 358 F.3d 473, 477 (7th Circ. 2004). Here, Lloyd Colbert, an employee of Appellee, was Appellant’s direct supervisor on the “C” shift and stated the racial epithet directly at Appellant. And, similar to Rivera in Gates, while Colbert’s conduct was not “physically threatening” or “humiliating” in a public setting, it was severe and humiliating, and, as stated by the Court, “A reasonable jury could also find that it did interfere with Gates’ work performance, not least because it led him to take a leave from work to seek medical treatment.” Gates at 18 (according to my printout of the case) or the next to last page of the decision. Similarly, Appellant sought medical attention for depression.

Judge Barrett: And it was accompanied by the threat of losing your house?

Counsel for Plaintiff: That is correct, your honor. And other threats as well.

Judge Barrett: And when is it your view that the terms and conditions of employment were altered for your client?

Counsel for Plaintiff: They were altered when he started being called the n-word, at least . . . .

Judge Barrett: At the very end . . . when he had two weeks left before he was let go?

Counsel for Plaintiff: They were being altered, yes, toward the end because the terms and conditions started to change after he heard the n-word, he had to go to the hospital. He was seeking treatment at the time.