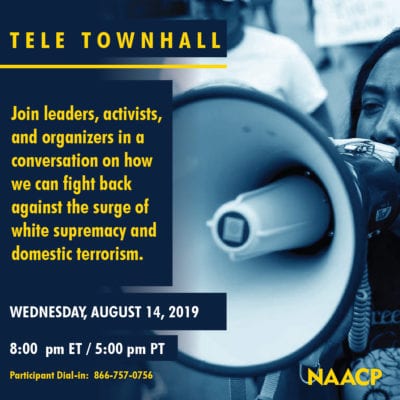 On Wednesday, August 14, 2019, the NAACP hosted a Tele-Town Hall to demand legislative action to combat the rise of gun violence, domestic terrorism, and white supremacy. The event brought leaders and activists together in a conversation on how organizers can fight back against the surge of white supremacy and domestic terrorism that is attacking our communities.

NAACP President and CEO Derrick Johnson along with Congressman Bobby Scott and Ohio Mayor Nan Whaley answered questions from callers on mass shootings, racist child separation policies at the border, and white nationalism. They were joined by Lecia Brooks from Southern Poverty Law Center and Matt Deitsch from March for Our Lives.

The Tele-Town Hall allowed concerned citizens and civically engaged partners a chance to discuss strategies on how they can use their power to create change in a meaningful way.