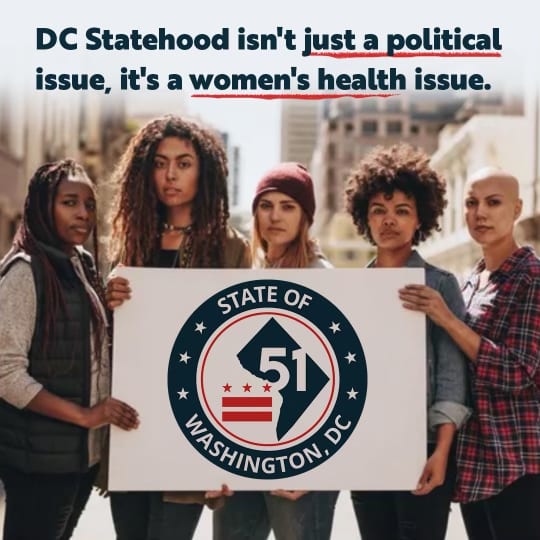 “Nearly half of District residents are Black,” the letter states. “If Washington finally became a state, it would be the first state with a plurality of Black residents. Statehood for the District of Columbia is a racial justice issue — and it’s a public health imperative.”

The open letter notes a number of ways in which the District’s lack of autonomy has put its residents’ health at risk. Large proportions of D.C.’s vaccine allotment have gone to federal agencies and to non-residents, while Black residents are going without. Congress regularly denies D.C. residents their reproductive rights by passing annual appropriations bills with riders that prohibit D.C. from using locally-raised tax dollars to cover abortion for people enrolled in D.C. Medicaid, who are disproportionately people of color. The letter also names the Black maternal mortality crisis and lack of local autonomy as further ways that systemic and structural racism has led to health inequities in the District.

“It has always been morally reprehensible to deny the people of Washington, D.C. representation in our democracy. But the triple intersecting crises of COVID-19, systemic racism, and attacks on reproductive health have laid bare the depth of inequity experienced by D.C residents, particularly those of color. People who live in Washington, D.C. are being denied the autonomy to build their own health care systems and make their own choices about their bodies. This is a matter of life and death.”

Together, they call on the U.S. Senate to follow the lead of the House, rectify the disenfranchisement of the more than 712,000 D.C. residents, and give them control over their bodies, lives, and futures by passing the Washington, D.C. Admission Act.